One of the biggest impacts of Coronavirus has been on mental health with thousands of people across the North East struggling to cope with all new stresses and worries brought on by the global pandemic.

Statistics on the government website showed that “self-reported mental health and well-being has worsened during the COVID-19 pandemic.

Levels of anxiety, depression and stress were reported to be higher than usual in late March and early April however they dropped again towards the end of April, although still not back to the levels reported pre-pandemic.

In April 2020 over 30% of adults reported levels of mental distress indicative that treatment may be needed, compared to around 20% between 2017 and 2019.

Erin Russell, a practicing counsellor for The Mental Health Charity  Mind, said: “I would say that overall people are experiencing a greater level of uncertainty due to the pandemic, specifically with work, and this has led to an increase in anxiety.”

“Others are really struggling with the impact of social isolation and loneliness and this has led to low mood.”

Suzanne, not her real name, 33, from Middlesbrough, said her mental health had been affected by the Covid lockdown.

She said: “I’ve felt really low during the lockdowns, I’ve been isolated from my family and friends and it’s left me feeling like I had nobody.”

“When things were at there worst I didn’t know who to turn to, I was left alone with my thoughts and it took me to a really dark place, I’m lucky that I’ve got a fantastic support system around me that really picked me up when I needed it.”

Despite the surge in people needing support, Erin added: “during the initial lockdown period, and again more recently with the second wave,  we saw a dramatic decrease in the amount of referrals coming through which was unexpected.”

“I think there are a variety of reasons for it.

“Some clients who had referred in said that they would rather wait until face to face was available again as they were uncomfortable talking on the phone.

“Others said that they had more immediate concerns, such as work issues, ill health, or for others their children/partners were now at home making it difficult for them to have a space to talk confidentially.”

However this drop in referrals did not mean a drop in people in need of help, instead it worryingly suggested that people were not reaching out for the help that they really needed.

Erin said: “Suicide rates have been higher in Sunderland and there has been an increased rate amongst a younger age group than usual – suggesting that people have been struggling with more issues but maybe not accessing support.”

“If you need help talk to friends and family – reach out to people and make an effort to connect with others. Humans are naturally social and we thrive on connection.

“In regards to general mental health and wellbeing – try establishing a routine for yourself, such as having a walk outside at the same time every day or having set times for meals.

“Getting outside into the fresh air and moving is really important for both physical and mental health. Find ways of relaxing and making extra time for self-care is especially important as people are experiencing higher levels of anxiety at the moment.”

“I am a big advocate of self-care and self-compassion and this is even more important at the moment. Whilst we may not be able to control what is happening around us, we can control how we look after ourselves.”

If you or anyone you know is struggling with their mental health and are in need of support then do not hesitate to reach out for help, by contacting one of the following  organisations: 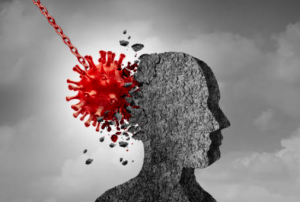 COVID 19! The Mental Effects Of Little Physical Activity During Lockdown.

15 January 2021 Comments Off on COVID 19! The Mental Effects Of Little Physical Activity During Lockdown.