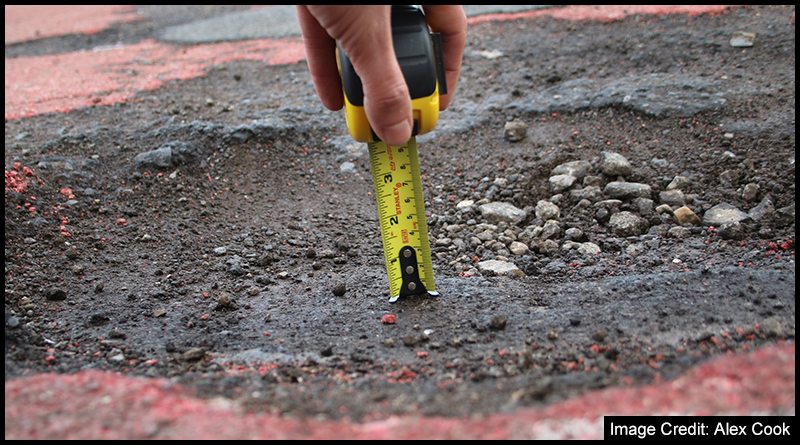 Getting from A to B in Middlesbrough can be difficult at the best of times.

But whether you choose to do this on foot, on a bicycle, by bus, or within the comfort of your own car, one all too evident problem can’t have gone unnoticed whilst going about your daily routine.

I speak, of course, on Middlesbrough’s pot hole crisis.

Ok, this may not be an issue not solely restricted to this part of the North-East.

It’s been a matter of nationwide debate and rage for a number of years now, prompting central Government to act.

But despite the many announcements coming from ministers promising cash to fix these problems, the cracks and bumps that throw us about on our journeys don’t seem to be going away.

In fact, here in Middlesbrough, they seem to be getting deeper and more abundant by the day.

But what that are the factors contributing to this problem locally?

Keen to explore the issue further, an obvious place to start was to look at the level of funding for road maintenance locally.

It’s no secret that Middlesbrough Borough Council has come under increased financial pressure during the age of austerity.

Last December’s, Fair Funding Review, prepared under the previous executive, suggested the local council has seen a real terms cut of 36% since 2010/11.

But the recent significant drop in funding, found through a Freedom of Information request to Middlesbrough Council, still proved surprising.

Having spent around £1.5 million on re-surfacing, maintenance and repairs of Middlesbrough’s roads for each of the past three years, the budget for the current financial year is less than a third at £445,000

The knock on effect has seen the number of surface repairs carried out drop from a high of 92 in 2016/17 to just 10 so far this year. 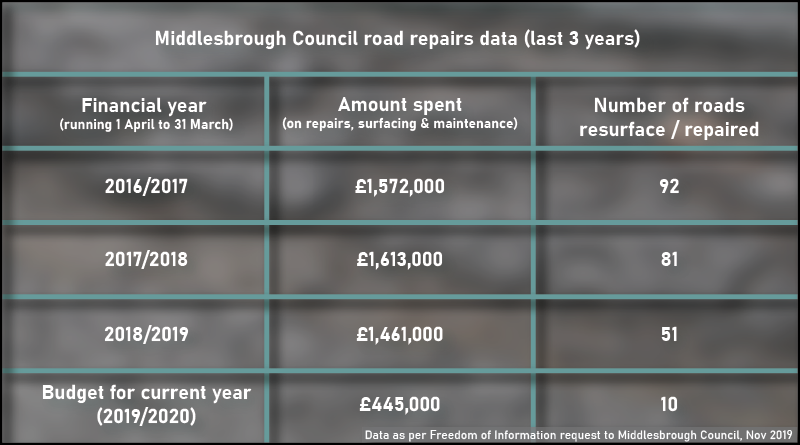 Hoping to query this situation with the Middlesbrough Council, requests were made to the Independent Councillor for Trimdon Ward and Executive member for Environment, Dennis McCabe, but sadly at this point no response has been received.

But we were granted an interview with Labour Group Leader and Councillor for Middlesbrough Central, Matthew Storey, who accepted “there is a problem with pot holes” in the local area and pointed to austerity as one of the main factors.

“You can’t divorce anything like this from the budgetary situation at the council.

“When you’ve had your budget cut… there’s a limit to how much the council can invest in those things, and that really is where the blame lies for those issues.”

Talking on Labour’s record during its time in power, Cllr Storey added;

“I think we invested a lot of money in the road system.

“That pressure comes from national government cuts and what we do is end up devolving these negative issues to the local authority when its not their fault.”

And he agreed that the people of Middlesbrough were right in being upset about the condition of local roads.

“It’s dead easy for people to treat these as small fry or parochial issues and they’re not.

“Pavements and the state of streets you drive up and down are very important to local people so we shouldn’t underestimate that.”

That this apparent drop in funding comes on the back of the North-East witnessing some of the most dramatic climate fluctuations of recent times seems even more unfortunate.

Less than two years ago, the Beast of the East covered the town in a blanket of snow and ice, while this summer the UK basked in a record breaking heatwave.

And these climate events will have put the roads that take us our places of work, play and home again under increasing strain, as Bachelor of Aerospace Engineering, David Bryan explains in some detail;

“Potholes are primarily formed through water ingress either through poor surface finish or subsurface methods.

“When water gets beneath the surface of a road, it erodes the substrata material creating a void. Then if that surface finish is not of a sufficent thickness, the weight of vehicles that passes over it can result in cracks forming and of course pot holes.

“But problems can also occur due to insufficient drainage around the localised area or through a ‘freeze-thaw’ process that can happen during cold weather periods.

“Excessive heat and expansion of the road surface during summer months can result in cracks developing, which again would allow water to penetrate beneath the road surface and in turn deteriorate its condition.”

The increasing weight of traffic

Another factor impacting  on the condition of the local road network is the growing weight of traffic they’re having to support.

Data from the Department of Transport estimates that an astonishing 0.79 billion miles were travelled by vehicles on Middlesbrough’s road during 2018, continuing a trend that has being going ever upwards for five of the past six years.

A figure that provides equal concern on an environmental level, the condition of Middlesbrough’s roads also provides an obvious challenge to the council’s stated aim of increasing “Active Travel*” by 2% per year.

For if our roads continue to be full of bumps, cracks and holes – and not forgetting giant puddles of water when it rains – who apart from the hardiest of souls would switch from the comfort of their car to the much greener method of pedal power?

As per an online comment received from a cycling enthusiast on the issue;

“There’s not one road in Teesside that doesn’t need some sort of repair, believe me, I’m a cyclist and my wrists get really knocked about.”

*travel by walking or cycling

So what can we do about the issue?

But here comes the crux of this article, because a look at Middlesbrough Council’s Report It portal suggests there has been only 154 public reports of pot holes made during the last year.

Having looked at this issue, whilst dodging traffic and attracting some peculiar looks in the process, it’s clear that this figure massively understates the problem.

As this article looks to attest, Middlesbrough is currently in the depths of a pot hole crisis.

But if things are to change, we as a community do need to act together, to put increase the pressure on the local authority and government to act.

And this is where you as a reader come in – because this initial article has is just the start of my investigation on this important local issue.

So please, get in touch with details of the roads and pavements that are effecting you getting about town – and together, we can build a true picture of a growing crisis that will be impossible to ignore. 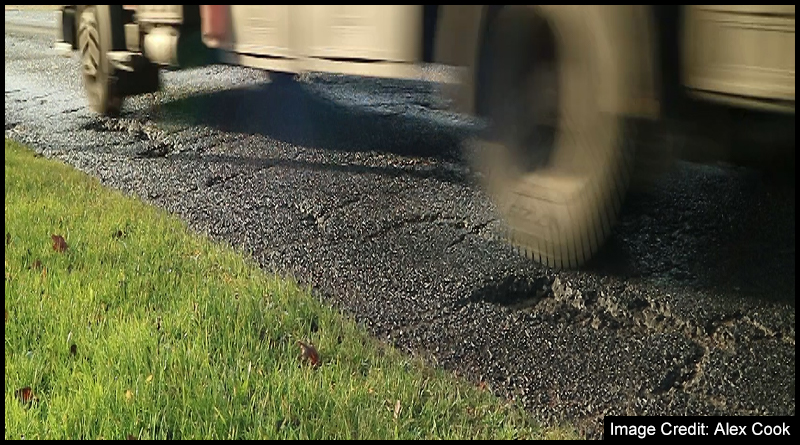 Note: all pot holes featured in this article have since been reported to Middlesbrough Borough Council through their ‘Report It’ portal on the council’s website.

30 April 2019 Comments Off on Organ Donation: Life on a waiting list

FOOD BANK USE REACHES HIGHEST RATE EVER, AS POVERTY LEVELS IN THE UK SOAR

20 November 2018 Comments Off on FOOD BANK USE REACHES HIGHEST RATE EVER, AS POVERTY LEVELS IN THE UK SOAR
Skip to content