What a glorious feeling, as Middlesbrough beat Barnsley by a single goal to nil, fans are happy again. 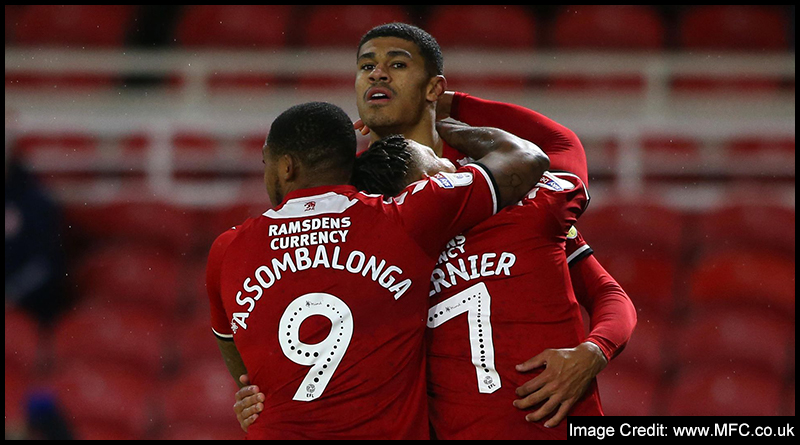 Should we be making a song and dance of this?

For Middlesbrough tasted sweet victory for the first time in eleven games last night, moving themselves out of the bottom three in the process at the expense of a Barnsley side now firmly rooted to the foot of the table.

Earned on what was otherwise a bleak night, Ashley Fletcher’s cool second-half finish, laid on after determined work from the excellent on the night Marcus Tavernier, proved the sole defining difference between the two sides.

And with that, Boro Manager, Jonathan Woodgate, was keen to look on the bright side.

“It’s three unbeaten, so lets take the positives,” he said.

But whilst this third victory of the season, another 1-0 home win to add to the collection, will provide some light relief, it’s clear that stormy clouds still remain overhead.

One for the footballing purists

Not a game for lovers of the beautiful game, this was certainly one for the footballing purists, with two sides in retched form going into the match, battling it out in equally retched conditions.

Suffice to say Marton Weather Station recorded 15mm of rain across yesterday, with a high of 6mm per hour just before kick-off.

That neither of these statistics register as a a monthly high seems absurd. For the 18,043 dedicated, yet foolhardy, souls that braved the conditions to make the trip to the Riverside Stadium, it felt much wetter.

Starting out in the three centre-half wing back formation, that might be described as 3-5-2, but that often looked like a 3-4-1-2 on the night, Woodgate was forced into two changes from the side that had snatched a draw from the jaws of victory the previous Sunday against Hull City.

The suspended Marvin Johnson was replaced by Hayden Coulson at left-wing back and goalkeeper Aynsley Pears deputised once again for the absent through injury, Darren Randolph.

Further rearrangement amongst the home sides ranks was also needed early on, as midway through the first-half, flying wing-back, Anfernee Dijksteel was forced off through injury, to be replaced by Marc Bola.

With players on both sides struggling to adjust to the conditions, as the ball slowed through the damp surface and sprays of moisture met each footstep, there was little to warm the home faithfuls cockles early on.

The opening action saw an industrious Boro huffing and puffing with little reward, against a Barnsley side that also appeared to carry a threat going in the other direction.

That the red’s defences remained unbreached early on was only down to some steely early defensive blocks and smart, solid work by goalkeeper Pears.

As the half wore on, Middlesbrough grew into the game, winning numerous corners and in particular two free-kicks in promising positions just outside the away-sides penalty area, only to largely waste the opportunities that had presented themselves.

Brit Assombalonga was soon to add to that frustration, with the best chances of the half falling to the striker.

His first was largely self made, as a barrelling run took the Congolese forward past two defenders and into the oppositions penalty area.

With his shot past goalkeeper Samuel Radlinger, the home fans were on their feet ready to celebrate, only for a last gasp sliding clearance from defender Ben Williams to halt the expectant cheers.

But an even better chance was to come moments after, after Assombalonga peeled off his marker from a sublime clipped cross from substitute Bola.

Finding himself deep inside the box with time and a plethora of options, all that was needed was to choose the best one; header, first time shot, or take a touch?

The striker choose the later, but in doing so allowed Radlinger to advance and snuff out the obvious threat.

And Boro were fortunate not to pay a greater price for their profligacy, as in stoppage time the Middlesbrough defence was carved open, leaving Cauley Woodrow a clear opportunity some 20 yards from goal, only for the striker to blaze comfortably over the bar with only Pears to beat. 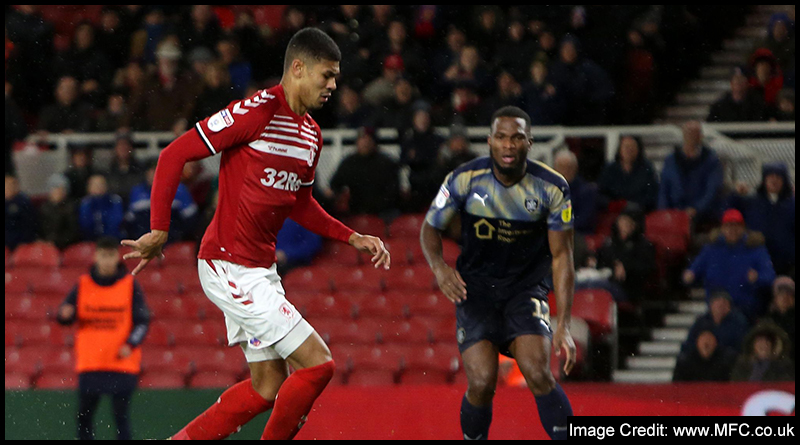 Second half: Fourth touch a charm for Fletcher

That late warning in the first-half was to be reinforced early-on in the second, as Barnsley hit the top of the crossbar through Jacob Brown.

Following a half-cleared corner, Brown was presented with the ball at the left edge of Middlesbrough’s penalty area with a chance to cross or shoot.

In fairness to Brown, it looked like the resulting right-footed, looping, curled effort that evaded Pears outstretched dive was intended as a shot, but the trajectory was such that it just wouldn’t come down beneath the crossbar.

The Tykes fans dismay at going so close was to then turn into disbelief as the Boro were to counter Barnsley’s bright start to the second-half by taking the lead themselves in the 54th minute.

A swift attack following some Barnsley pressure saw the tireless Tavernier break beyond the strikers and onto a through ball from Assombalonga, ahead of a turned and disorganised Tykes back-line.

Soon to be met by defender Dimitri Cavaré, it was the Barnsley player that looked to have regained control of the situation, only for Tavernier to use his guile and strength to cease upon a loose touch.

Now set clear down the left channel, Tavernier looked up and found Fletcher alone and in acres of space by the penalty spot with a simple slide rule pass.

A touch from Fletcher drew a dive from Keeper Radlinger, a second evaded the challenge of Mads Anderson and by the third, Fletcher was in the six yard box with the goal at his mercy.

Much to his and the home fans relief, the fourth touch saw Fletcher calmly role the ball into the empty net.

If there was one bright spot for Middlesbrough fans to take home on a dismal day weather wise, apart from the much needed victory, it was the performance of young, Marcus Tavernier.

Forever playing with a smile on his face, this 20 year-old displayed a temperament beyond his years alongside quick feet that Don Lockwood (Gene Kelly) would be jealous of.

He was at the front and centre of everything that was good about Middlesbrough’s performance on the night, including laying on Fletcher’s goal in a scenario that typified his overall display.

And it’s certainly a performance that his fellow teammates should take note of – if they want to get out of the predicament they find themselves in at the lower reaches of the Championship table.

His positive, energetic and intelligent contribution is exactly the sort that has to replicated across the starting eleven and its certain that manager Woodgate will be demanding more of the same from a man that looks to have the potential to become a Boro legend. 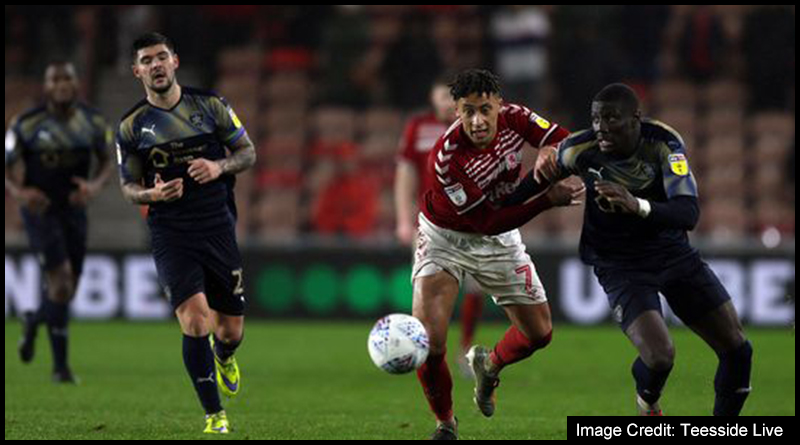 No way back for Barnsley

Despite there being plenty of time left in the game at the point of Fletcher’s goal, Barnsley failed to look like equalising thereafter, try as they might.

This was due in part to the resolute and assured displays of Dael Fry and Daniel Ayala, alongside the midfielder turned centre back Jonny Howson, providing Middlesbrough a platform to forage for a second on the counter.

And indeed, it was Boro that would create the better chances of the two sides in what remained of the game, with Assombalonga once again forcing Radlinger into a save from a wide angle, before failing to find a teammate after pouncing on the rebound.

Then after defending a corner in their own box, a swift break would end up with full back Coulson surging down the middle of the park with just the keeper to beat.

Assombalonga and fellow fullback Bola had made up good ground to support as options square to his left, but, given Coulson would hardly have believed the position he had found himself in, it wasn’t difficult to see why he choose to take on the opportunity himself.

Not for the first time, Radlinger was again on hand to make an important save, keeping his side in the hunt for a point in what remained of the game.

But as the rain continued to pour, the Boro regard remained firm and true to close out the match.

And whilst not too many fans would have rejoiced the three points by dancing through the puddles on the way home, they could at least; walk down the lane, with a happy refrain, just singing, singing in the rain!

The result means Middlesbrough rise to 20th to the table on 17 points. Barnsley remain at the foot of the Championship on 9.

Middlesbrough’s next fixutre is away to Leeds United on Saturday 30th November, whilst Barnsley entertain Hull City at Oakwell.

STAR MAN BENRAHMA ONE OF THE BEST IN THE CHAMPIONSHIP