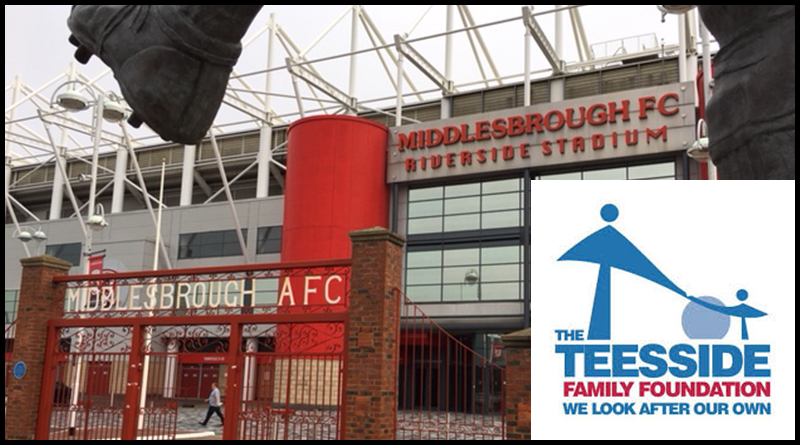 Middlesbrough football fan’s are to be asked to dig-deep tonight, as volunteers with buckets on behalf of Teesside Family Foundation will be looking to raise funds to support the charities life changing projects this Christmas and beyond.

Under the mantra #WELOOKAFTEROUROWN, the foundation, which received charitable status in 2018, looks to “improve the quality of life to all of those in need in our community throughout Teesside, whether due to age, disability, ill health or financial hardship.”

Looking to spread a little joy this Christmas through their Selection Box Appeal, which will see the charity arrange around 3,000 Santa visits to sick, disadvantaged or disabled children in the local area during the festive period, the foundation also has set its sights on doing even more incredible stuff in the new year.

This includes its latest ambition is to raise funds for a sensory room at Kirkthleatham Hall School, with the planned educational and therapeutic space having the potential to benefit up to 20,000 children with special needs a year.

“Whatever we raise or do – it all stays on Teesside”

Speaking of his pride of being involved with “this fantastic charity” on the Teesside Family Foundation website, Chair of Trustees, Michael Poole, Senior Partner at Michael Poole Property Consultants, explained “the attractions were simple.”

Wanting to help “local people who through no fault of their own had fallen on difficult times” was a big factor, alongside the “infectious” nature of fellow establishing Trustees Tony Wedlake and Neal Bullock’s “passion and commitment to helping people on Teesside.”

And this initial commitment has seen the charity do some amazing things in such a short time, aided by some big names in the local business community such as headline corporate partners Cleveland Cable Company, ever popular Yarm night spot, The Keys and Yellow Box Marketing.

Raising over £100,000 in it’s first full year, the foundation was able to purchase it’s first holiday home at Primrose Valley Holiday Park, helping to provide a space for hundreds of Teesside families in difficult situations to create memories, whilst setting up the monthly Shining Star awards, that looks to recognise “local individuals or groups that have gone above and beyond within our local community.”

And for Poole, there is a very clear reason why local people should come together and further support this foundations important work.

“Every penny raised goes to helping the individuals or groups in need.

“We don’t pay salaries and the trustees sponsor a lot of the background work done.

“Not only that – whatever we raise or do – it all stays on Teesside.”

Preview for tonight’s crucial foot of the table clash

Turning to tonight’s game, this crucial foot of the table clash comes during a prolonged troubled period for Woodgate’s men.

Middlesbrough last tasted victory as far back as the 14th September, that being the 1-0 win at the Riverside Stadium against Reading, some 10 games ago.

But that result also heaps the pressure on tonight’s fixture against bottom of the table Barnsley, with the Boro currently sat in the relegation spots and facing three sides currently in the playoff picture, including an away trip to leaders Leeds United, across their next four fixtures.

Home fans might be able to find some hope for tonight’s game in the fact that Barnsley’s own winless run spans even further back than Middlesbrough’s – their sole victory coming on the opening day of the season against Fulham.

But suffice to say, failure to take three points tonight will leave the Boro in a tricky position as we enter the busy festive period – and increase the difficult questions being put to rookie manager Woodgate for the home faithful.

In terms of team news, defender and club captain George Friend has been ruled out until February because of a continued thigh problem, whilst goalkeeper Darren Randolph remains a doubt.

Meanwhile, the visitors look set to be without the services of Finnish defender Aapo Halme, after he sustained a head injury during their 3-2 defeat at Blackburn Rovers.

For more information about the Teesside Family Foundation and how you can support this fantastic local charity, go to www.theteessidefamily.com or check out their Facebook page.

Why is organ donation important?

29 April 2019 Comments Off on Why is organ donation important?