A horse riding centre has undergone a huge financial facelift.

Richmond Equestrian Centre showed off £100,000 worth of renovations at a recent grand opening. 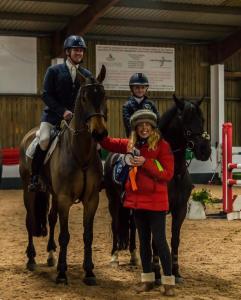 James Adams taking part in the major and mini with Donna Wood presenting on the night of the grand opening.

The centre, based at Breckenbrough farm near Cattrick, raised over £700 with the help of competitors from all over the country and top class event riders including James Adams who competes regularly in CIC 3 star events.

Volunteers and over 600 spectators from all over the North East came out to perform to show their support for the thriving  facility and raise money for the Great North Air Ambulance – a charity that has helped many injured riders in emergency situations.

The show finished with a major and mini competition – an event that sees top class event riders like Tanya Buckingham and James Adams paired with junior riders to compete against the clock for prizes.

Donna Wood, The centre’s Managing Director, said: “ It was really amazing, it was a fantastic evening with a wonderful feel good factor and it’s so special knowing we’ve got so many people supporting us.”

The facility, which hosts a range of affiliated and unaffiliated competitions every week from show jumping and dressage to BE eventing and has even had demos from horse whisperer Monty Roberts, has recently taken great pride in renovating its facilities

The renovations have included levelling the indoor arenas and laying down brand new surfaces from Equestrian Surfaces ltd, new outer boards and show jumps along with a fresh coat of paint.

These upgrades are said to reduce maintenance and replace tired facilities to make them even of greater quality.

Before and After: The indoors new renovations

Along with regular competitions they offer the arenas to hire out for schooling, something horse riders from the North East can really benefit from.

The centre is looking to improve further in the future with new cross country jumps and a new international dressage arena.

The facility also hopes in the future to be able to run school and university events so society’s like Teesside University Equestrian can come and compete against others in the North East in a top class venue.

The facilities are second to none in the North East with visitors coming from as far out as Scotland, Nottingham and even Surrey.

Donna said she owes the  centre’s popularity to: “Running good shows, clean facilities, great new surfaces and a good café. We’ve also got a large following and we always run to schedule so people can plan their journeys and not find themselves waiting around.”

Richmond Equestrian Centre also provides a livery service and gallops which can be hired out.

Its full exhaustive list of shows including live running times can be found at http://www.richmondequestriancentre.co.uk and the office can also be contacted on 01748 811 629 the centre also has a regularly updated Facebook page.

FEMALE SPORTS PARTICIPATION LEVELS ON THE RISE IN THE UK, WITH HELP FROM #THISGIRLCAN

29 November 2018 Comments Off on FEMALE SPORTS PARTICIPATION LEVELS ON THE RISE IN THE UK, WITH HELP FROM #THISGIRLCAN
Skip to content