One of the areas that has been affected massively this year due to the global pandemic has been amateur football and grassroots football.

When professional football got the go ahead that their season could start, it was amateur/grassroots football that has still suffered.

A lot of grassroots and amateur football teams are struggling financially with the lockdown as they depend solely on fans to keep the club running.

No fans meant no match day income and therefore no money coming into the clubs.

Fortunately for Pools Youth ladies, a team who play in the DCFA Women’s league 1, they didn’t have to worry about the money side of it.

For Pools, their only worry was when was the league going to start?

It wasn’t until the beginning of July when Prime Minister, Boris Johnson, made the announcement that grassroots football could return albeit with amended rules.

After waiting for what seemed forever, the go ahead was given for the season to start.

“It was so strange at first.”

“When we were allowed to train, we had to train with one coach to five players.

“We have a big squad, who are all very close, so it was hard not being able to play contact football.

“But for us as a team, it made it more determined to put in 100% at every training session and work as hard as we could to be ready for the season to start.”

During the lockdown the team all agreed to keep paying their £20 per month subs.

Club Chairman Paul Stabler said: “It just shows you what a great bunch of ladies we have.”

“The girls wanted to keep paying their subs so that we could afford extra training sessions after the lockdown.

“When we were allowed to train again we ensured that we had all the correct safety measures in place from track and trace, to having sanitizing points at the entrance of the pitches.

“The most frustrating thing for us was that when the lockdown was lifted, teams in the leagues above us were still able to play and have spectators.

The government set out a guidance for grassroots football which entailed what clubs in each tier could and couldn’t do regarding playing matches and training. It had steps on what to do before, during and after a game. 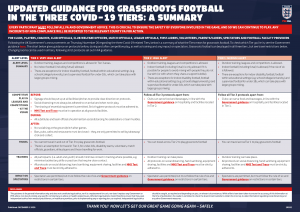 The guidance chart given by the FA.

Pools Striker, Demi Burdon, was one of six ladies who contracted the virus.

“It was a horrible time for us, especially because we are such a close team,” she said.

“I couldn’t thank the girls enough for what they did for me and each other during it all.

“If anyone of us needed anything, one of the girls would go out of their way to ensure we had it.

“For me, the team motto fits in so well, ‘The Family Club’ because that’s what we are, we all support each other when times are hard and that proved this year. 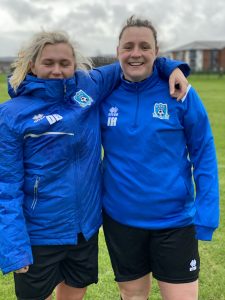 Pools Youth currently play their home games at the TDSOB in Hartlepool and are always looking to add new players.

Pools have teams for all ages, both boys & girls teams, starting from under 5’s going up to men’s and ladies teams.

Middlesbrough Manager hoping for another win.

3 December 2021 Comments Off on Middlesbrough Manager hoping for another win.

The Trailblazer in Football: Josh Cavallo

12 November 2021 Comments Off on The Trailblazer in Football: Josh Cavallo
Skip to content