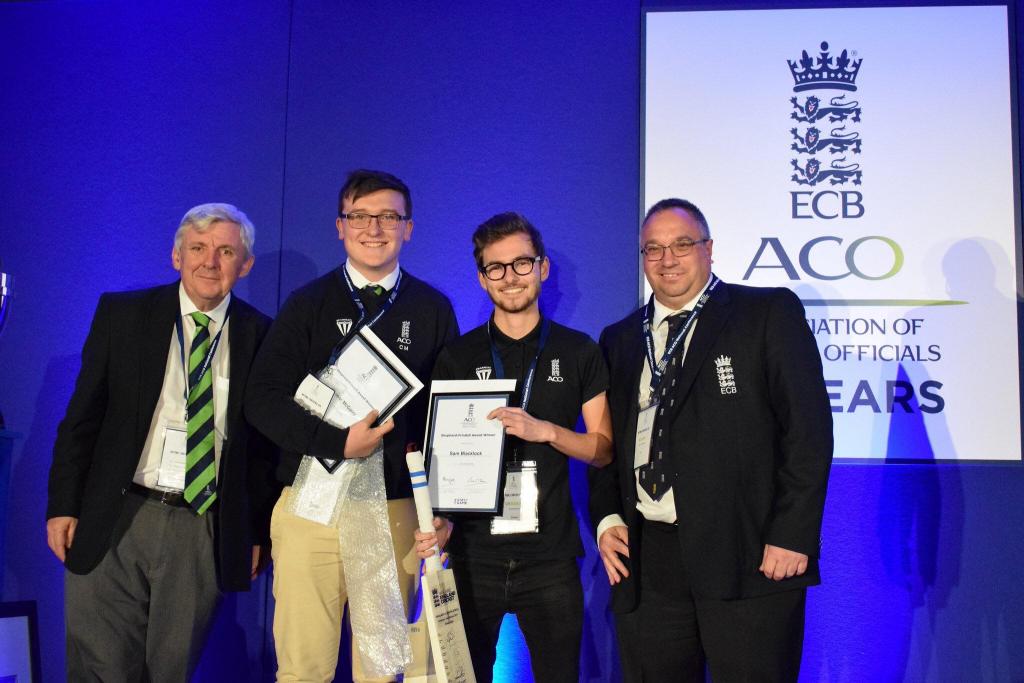 Sam currently scores for North East Premier League side Eppleton, alongside Durham under-15s and appoints scorers to different county age groups for Durham Cricket Board, making this honour a huge shock for Sam, one he couldn’t believe.

The 21-year old from Hetton le Hole was at the ECB conference at Lords Cricket Ground, London, where he was presented with the award by BBC Test Match Special Commentator, Charles Dagnall.

Speaking about his surprise at collecting this prestigious award, Sam was stunned, saying, “I didn’t have a clue about the award.

“I score because I enjoy it, I am lucky that I get to travel around scoring but you don’t do it to win awards, you do it purely for the enjoyment.”

For now, Sam is firmly focused on his final year of University but scoring is still a possibility for the future: “I am in my final year at University studying Journalism, so the aim is always to work in the media industry, but if a scoring job came up somewhere in the country, you never know I might just do it one day.”

Durham Cricket Board Director of Cricket Development, Graeme Weeks, said, “This is a massive achievement and I was very pleased to know that Sam has been honoured at a national level for his commitment to the game.

“Having won a Durham OSCA (Outstanding Service to Cricket Award) in 2014 for Young Volunteer, Sam has been consistently proactive in taking up opportunities and getting involved both at club level and country level and I think that this award is a testament for his work but also reflects on Sam’s contribution outside the scorebox.”

Eppleton Cricket Club Director of Cricket, John Smithson, said that the club are “extremely proud” although he believes that this award goes beyond scoring, saying, “He enjoys his scoring so much, so to be awarded Young Scorer of the Year is a real reflection of what he does in Durham, this isn’t just for being a good scorer, but for the extra work he does outside the scorebox.”

If you are interested in pursuing a career in scoring, Durham Cricket Board Association of Cricket Officials is running a free ‘Introduction to Scoring’ course on February 10 2019. The event will be held at the Emirates Riverside Stadium in Chester le Street. If you want more information, please contact dcbaco@outlook.com

FLETCHER SCORES IN THE RAIN, TO EASE BORO’S PAIN

28 November 2019 Comments Off on FLETCHER SCORES IN THE RAIN, TO EASE BORO’S PAIN
Skip to content