People, young and old from across Teesside and the North-East gathered in an unseasonable but nevertheless gloriously sunny Middlesbrough on Friday, to demand urgent action against Climate Change.

Meeting at Centre Square just before midday, a group of over hundred would go on to march through the town centre, loudly voicing the need for change, much to the bemusement of onlooking shoppers.

After a short rally and ‘die-in’ at the cross section of Corporation and Linthorpe Road, the climate strike then returned to centre square where those gathered basked in the Indian summer whilst listening to songs and speeches

Co-originated as part of a series events happening across major towns and cities World wide ahead of the UN Climate Action Summit on the 23rd of September, the #StudentStrike campaign has somewhat controversially called on school children to take time away from classes to campaign on the issue of climate change.

The movement, which is thought to have originated in 2015, has gained a marked increase in traction over the past year after being spearheaded by the 16-year-old, Swedish environmental activist Greta Thunberg.

The online body that has overseeing two previous strikes, the UK Student Climate Change Network, claims that previous action in February and March had attracted more than 10,000 and 50,000 participants respectively.

And the BBC have reported that thousands have joined in today’s protests across the UK, including in Newcastle, Manchester and London, with the worldwide figure for those to have taken part estimated to be in the millions.

LINK: CAN WE END OUR LOVE AFFAIR WITH PLASTIC?

“If we choose to act, it must be now”

Today’s event in Middlesbrough was chiefly organised by another young environmental activist, Jess Maddision from Hartelpool.

Supported by her family, 16-year-old Jess, was full of praise for the scores of local people who turned out with her to press the cause for immediate action.

“It’s amazing for Teesside” said the Newcastle Collage student, adding “the wide range of people who have just come together, to take responsibility, just goes to show this is a really crucial matter.”

And whilst she would have preferred not to have lost valuable time towards her A-Level studies in Politics, History and Geography, Jess couldn’t be clearer in her heartfelt belief that organising today’s protest was much more important, declaring;

“Change is coming, whether you like it or not”

Also in attendance was Peter Bumstead from Billingham, standing out from the crowd in his high-viz vest.

Part of Extinction Rebellion Teesside, Peter who was helping to marshal the event, had a very clear message for those looking on and wondering what today’s event was all about.

“Change is coming, whether you want it or not.”

“A four percent change in temperature is an existential threat for us” Peter would go on to claim, also adding “over 50 years Climate Change will result in 6 billion deaths.”

Praising today’s turnout, Peter was reassured by a growing “awareness amongst people that we need to do something.”

Asked what needs to change, Peter highlighted Extinction Rebellion’s “three demands” – to become carbon neutral by 2025, for the media to tell the truth on climate change and for a Citizens’ Assembly to be created.

He was also keen to encourage “everyone to get involved” in the fight against Climate Change.

“Destroying our only earth”

One of the children not in school and attending today’s Student Strike was Haddie Mills, accompanied by her brother and proud father David.

Asked why she felt it was important to attend, Haddie pointed to today’s action being about “everyone’s future” and feared that the way we are living now is “destroying our only earth.”

And supportive father David, was full of praise for the stance his daughter had taken in wanting to be at today’s Student Strike.

“Haddie was the inspiration behind attending today” stressed David, adding “I’ve always encouraged my children to educate us older ones.”

Later revealing that his daughters strong ecological beliefs have been instrumental in the families transition towards a more sustainable way of living, David was also philosophical when asked what he would say to parents who might be critical of him for allowing his daughter to miss a day of school in order to attend.

“One I want to respect the moral integrity my children have about Climate Change.

“And two, in the context of this life its a very small amount of time to be missing.”

Questioned whether he feared receiving a fine from Haddie’s school for an unauthorised absence, David’s relaxed response was that he “didn’t mind.”

As the march proceeded outside a busy Cleveland Centre, the reaction from those going about their daily routines was decidedly mixed.

Some reached for smartphones to record the loud commotion, whilst others just looked on wondering what exactly was going on.

This included a group of retired ladies outside Boots, who didn’t know “what to make of it all?” When asked if they knew what the protests were about, the stark group response was “no!”

It was also evident that an opposing youthful element were not in full agreement with the march, as a track-suited teen provided the derogatory response of “you want a slap, that’s what you want!” to the protesters chants of ‘what do we want?’

However, two gentleman, who were sat enjoying the midday autumn sun as the procession passed, provided a much more positive response.

“It’s great” said one, “we need to be more environmentally aware,” before in solidarity the other gentleman offered, “keep the pressure on!”

Yet, whatever one’s thoughts on today’s events in Middlesbrough and across the World, one pressing thought must have been playing on our minds regardless of how much we might have been enjoying it.

A temperature 21°c in late September, here in the North East – that can’t be normal, can it?

What are your thoughts on Climate Change and the international action taken today? Get involved in the debate @TU_Xtra using the hashtags #ClimateChange #StudentStrikes 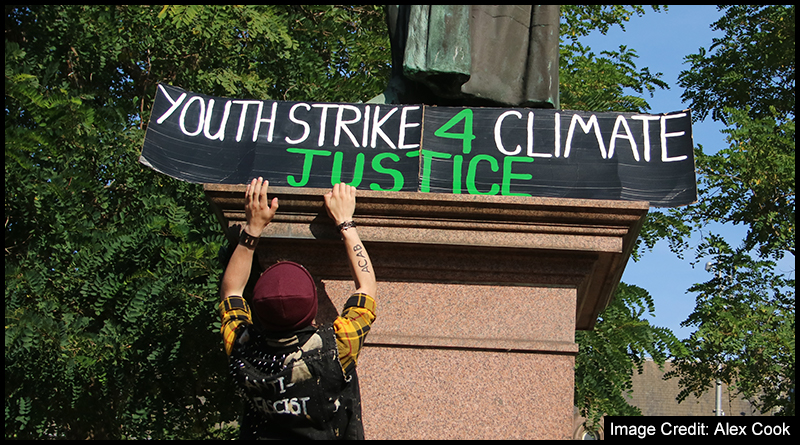 22 November 2019 Comments Off on KILIMANJARO HIKE AGAINST SUICIDE