The second series of Channel 4’s, The Circle has had fans gripped throughout. But who will be crowned the ultimate ‘Influencer’ and walk away with £100,000?

TUXtra spoke to student fans of the show to get their takes ahead of the finale.

If you’re anything like me, your nightly viewing habits from late September onward’s will have been dominated by one TV show; Channel 4’s, The Circle.

Granted, the basic premise of a reality TV show, attempting to mimic life on social media, doesn’t sound like anything special.

To explain to those who are uninitiated, the show sees a group of players enter a Salford tower block, tasked with the aim of becoming the most popular flatmate in order to win a cool £100,000.

So far, so boring; but there is an added catch.

Each player is isolated from each other and the outside world, with their only means of verbal communication to other players being through the Orwellian style, social media, intermediary; The Circle.

This provides players with a choice – do they stay true to themselves and back their personality to win them the cash – or do they play as someone else?

Once placed inside their plushly decorated cages, our human guinea pigs begin by creating their ‘online’ profiles and avatar and then look to make connections with the other players, each fully aware that there could be a ‘catfish’ or more within their ranks.

Indeed, series 1 concluded with a catfish being crowned top ‘Influencer’, as Alex Holborn spent 3 weeks successfully convincing others that he was in fact his girlfriend, Kate.

At the time, his victory on the show was met with much controversy in the real world of social media, with fans divided on whether what they had witnessed was a fair outcome.

But perhaps this alludes to one of the key elements that makes this modern day social experiment such required viewing; because unlike other reality shows where viewers hold a real influence on the ultimate outcome, within The Circle it is the players themselves who decide who is ‘Blocked’ and who wins. 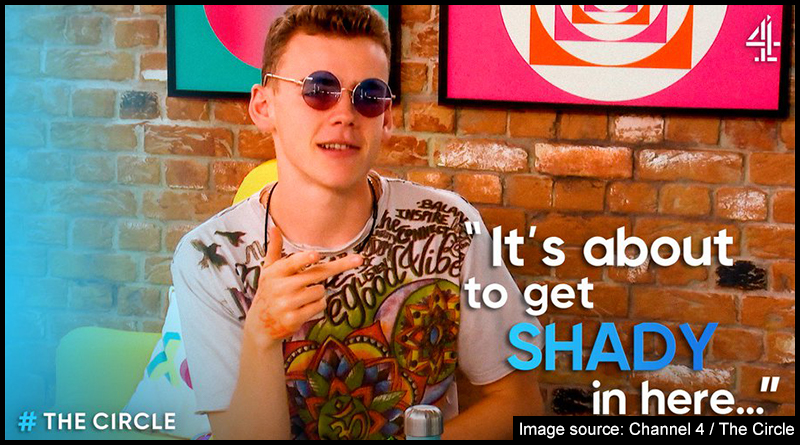 Who’s who in series 2

With just two shows left before the winner of the £100k is decided, the flat now holds just six players who have intriguingly organised themselves into two very distinct groups.

On the one side, there is the C.S.I.’s containing former monk, academic and Santa Claus, Tim; loud, body confident and serial ‘bestie’ befriender, Ella; plus young merchant of free love, Woody – who’s parents just happen to be Norman Cook, a.k.a Fatboy Slim and Zoe Ball.

However, three opposing members have joined forces in an effort to disrupt this seemingly happy grouping and in the process benefit their own positions in the game.

Led by single mother Sammie, the self dubbed Circle of Trust: The Revolution also includes straight talking Irishman, Paddy and feisty yet honourable, Georgina; who are both looking to use their platform on The Circle to challenge the perception of those with disabilities.

And single mother Sammie is actually Liverpudlian recruitment consultant James, who appears to have a strange affliction to wearing anything on his upper torso. 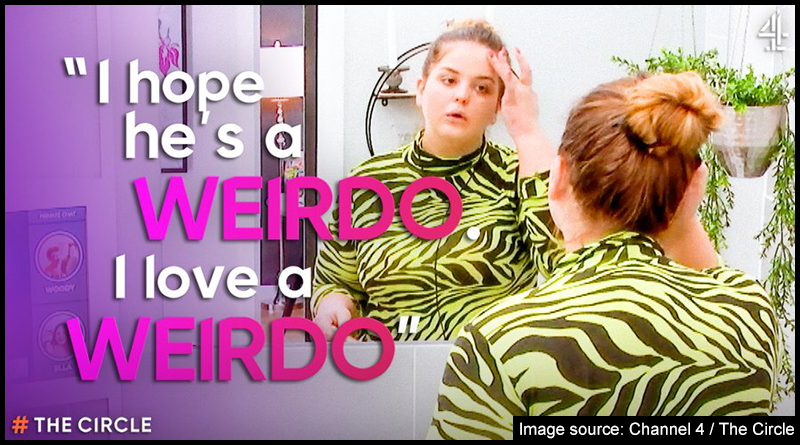 “Sammie is definitely my favourite”

Wanting to find student fans of the series that could also provide a qualified opinion on the psychological aspects of the show, I reached out to members of Teesside Universities Psychology Society for assistance and found two willing contributors in Amy Keegan and Rebecca Gilling.

With both describing themselves as “hooked” on the show, they certainly seemed to fit the bill, although Amy did feel it was impossible for her to watch objectively due to being “way too invested.”

But Amy was quick to offer a controversial response, when the subject of her favourite player came up.

“Sammie is definitely my favourite. I love a good catfish,” was the definitive response, as Amy explained that for her the catfish’s in the game were a crucial part to making the show different from Channel 4’s earlier trail blazing reality show, Big Bother.

“I respect the catfishes who are not only convincing, but can keep it up for a long time because I imagine it’s mentally draining” continued Amy, adding that in her opinion James was simply “playing the game well.” 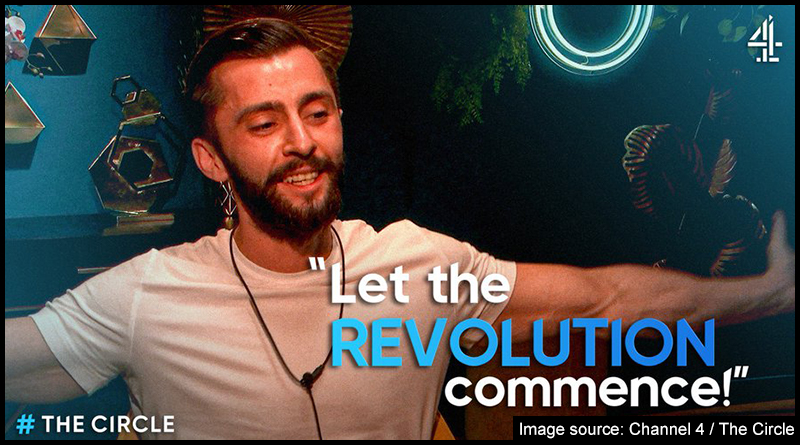 Rebecca also agreed that Sammie had “made the show far more interesting” and offered her own take on why James’ positioning as a single mother with a young child has proved so convincing to the other players.

“It’s almost like they don’t want to believe a young mother wouldn’t be who she say’s she is?”

Noting that previous catfish in the game had been “outed because of their one dimensional conversations” Rebecca also mused about Sammie’s own narrow topics of conversation and what The Circle’s reaction to this might indicate about our views as a wider society.

“Sammie’s conversations have largely revolved around her ‘son’.

“Everyone has been receptive to Sammie showing other sides to herself, but it hasn’t raised alarm bells that she only has one real topic of conversation.

“Does that mean that we as a society expect young mothers to only discuss their children?” 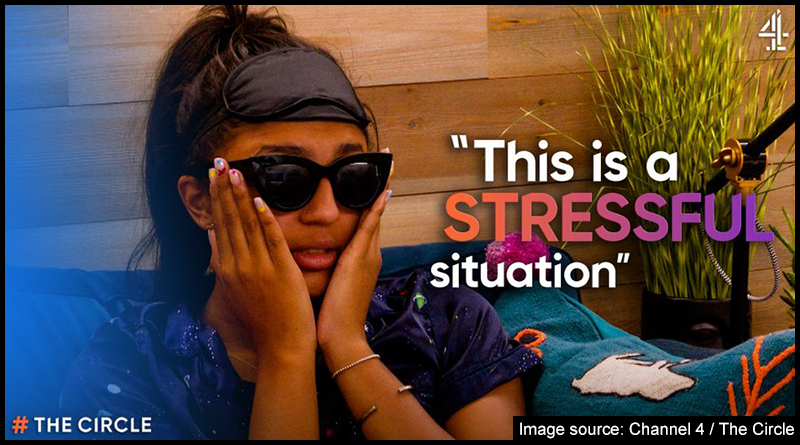 Rebecca also offered praise for James for his level of preparation in creating the catfish persona of Sammie.

“James has definitely chosen a wise avatar to use, she pulls on the heartstrings of the more emotional players.

“Hats off to him on all of his research too, he’s definitely done better than all the other catfish.

“I think that’s because he’s incorporated his own personality into this character as well as having a good sense of the life he’s building for Sammie.”

And whilst some maybe critical of James for using underhand tactics in trying to establish a triumvirate, Amy felt the conditions of the show have a part to play in encouraging this behaviour and that all players have also been employing largely unconscious techniques to win favour with others;

“I think the whole premise of the show depends on social psychology and social inclusion/exclusion.

“It play’s on the desire to be liked or to be in an ‘in-group’ and you can see the players responding to this.” 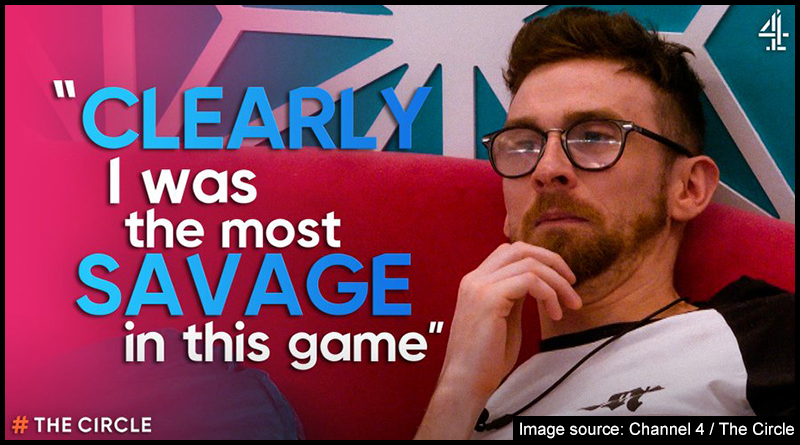 Wanting to get a further qualified slant, I was keen to get the opinion of someone who specialises in the area social media and luckily for me an ideal source, my partner, wasn’t sitting to far away.

Olivia McHale, is a Masters Graduate in Multimedia Journalism and has been a keen follower of The Circle, having writing regularly about series one via her own online alias, The Nothernist.

And she certainly isn’t impressed with the way James is playing the game.

“At the beginning, I thought that James was playing a really good game as Sammie and I was almost convinced that they would win, but as time has gone on, James has become nasty, spiteful and extremely manipulative.

“One thing that really gets under my skin is James claim to be ‘doing it’ for single mums.

“He is emotionally unintelligent, manipulative and bitchy to almost all of the other players, which are not qualities single mums would want attributing to themselves.

“I understand the game needs to be played, but Tim shows that the game can be played by being kind and loving, rather than the twisted game that James is playing.”

With that of her chest, the topic then turned to what The Circle can teach us about our own social media use and Olivia was full of positive insight in how the show both warns of the bad and the good that modern technology can bring to our lives.

“In terms of catfishing, The Circle has certainly brought an awareness to a wider audience and will hopefully make people think a little more on how trusting they are with a person that they meet online.

“But there are also many positives, with the show also highlighting that social media does the power to bring people of all races, different ages, sexes, sexuality, abilities and outlooks together and for me that is one of the most important aspects.” 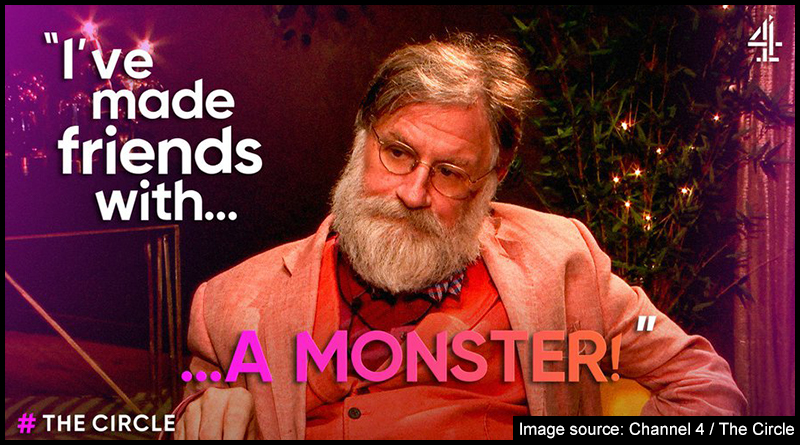 You’ve heard from our experts. Now it’s over to you!

What do you make of the current series? Do you enjoy the catfishes? Who do you want to win?

As always, we’d love to hear from you, so make sure you include @TU_Xtra in all of your #TheCircle social media posts.

1 August 2019 Comments Off on DISCUSSING: THE LOVE ISLAND EFFECT

25 October 2019 Comments Off on SPEND THIS HALLOWEEN WATCHING CLASSIC HORROR…IN A CASTLE!
Skip to content