My life with ferrets is the theme of my project but presented through a distorted media lens hence the title ‘The Ferret Menace’. I want to demonstrate in a somewhat tongue-in-cheek way,  how shrewd editing and biased reporting can create a false and even damaging impression. 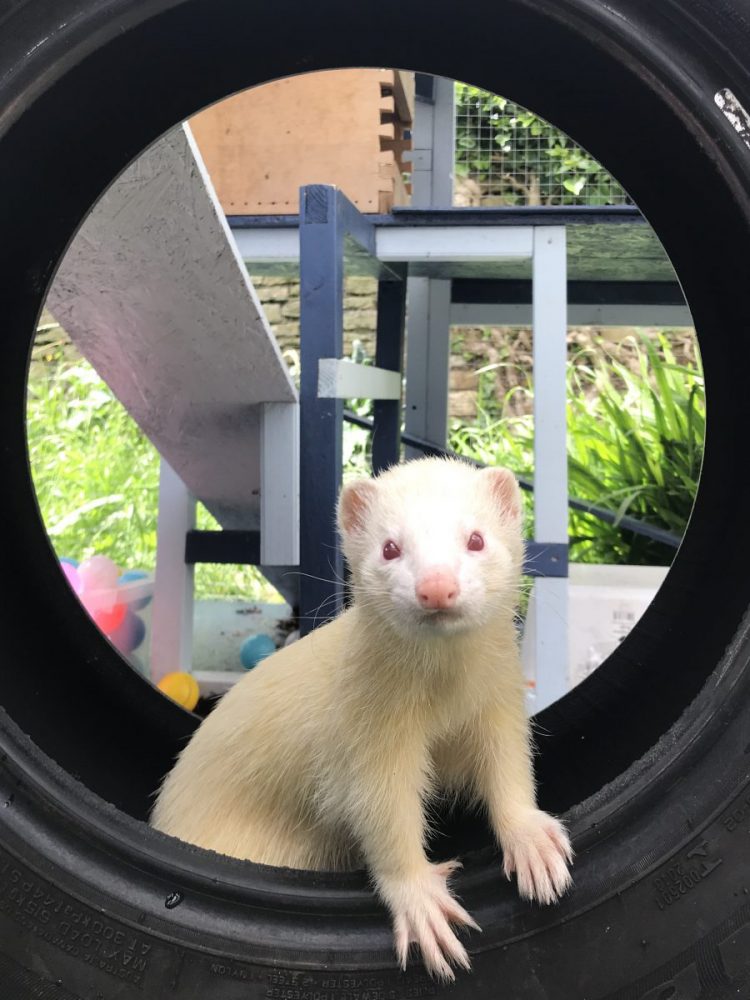 This first image is a straightforward portrait of Dan the ferret. As an image, it’s a lucky accident. Ferrets, like many animals, often snub  gifts and accessories and all our ferrets have studiously ignored this tyre swing in their outdoor pleasure palace. On this occasion, not only did Dan decide to play in it, he also uncharacteristically stayed still, posing even, while I grabbed this photo. It was taken hastily with my mobile phone camera so, while I like the image as a fun snapshot, I’m a bit frustrated that his fur from his nose upwards is quite burnt out. 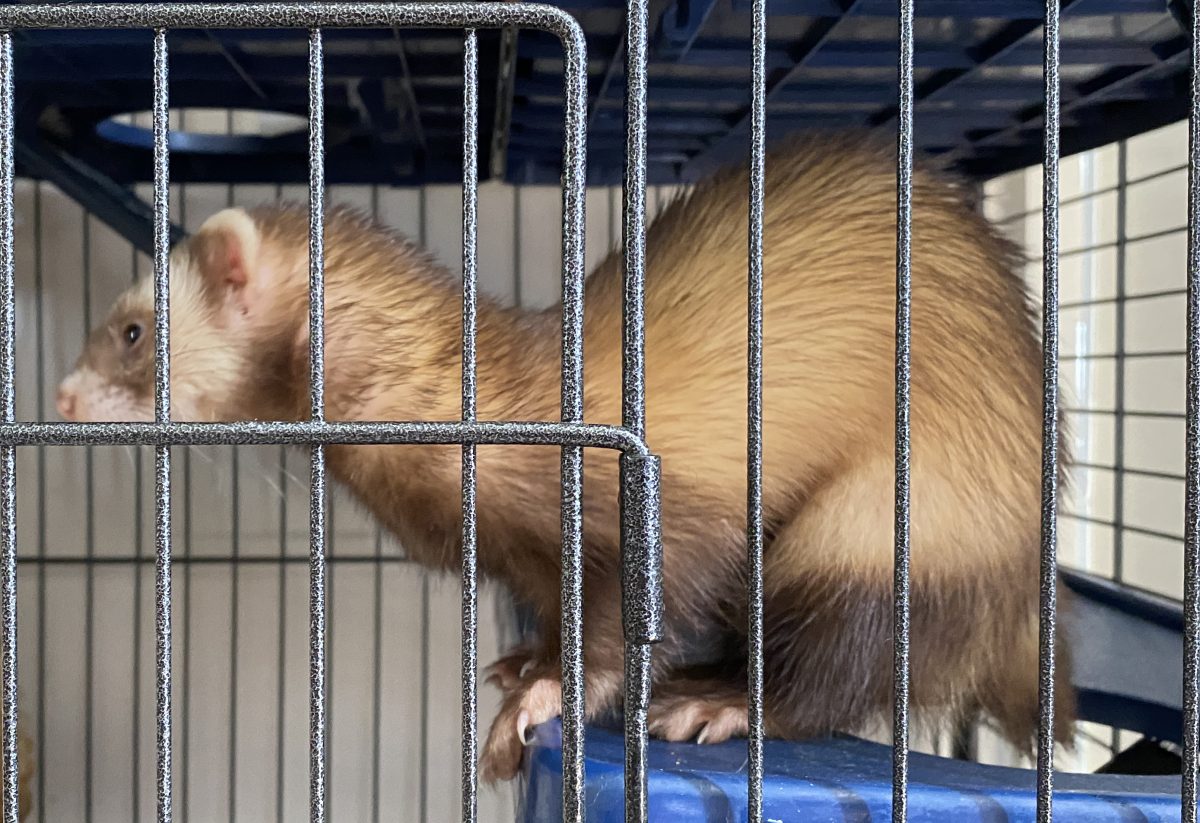 I hope that it’s clear that this photo of Daisy is an example of how photographs can be manipulated to give a false impression. This is my ‘landscape’ photograph – the landscape being the prison in which this poor, wretched creature is languishing. In reality, this is heavily cropped photo of Daisy’s quite luxurious home which is, in fact, on three levels and the bottom level is left open so the ferrets can come and go as they please. It’s largely just used for eating and sleeping. Daisy’s face isn’t quite as sharp as I’d have liked but I do think it works well as a covert photo taken by an undercover reporter. 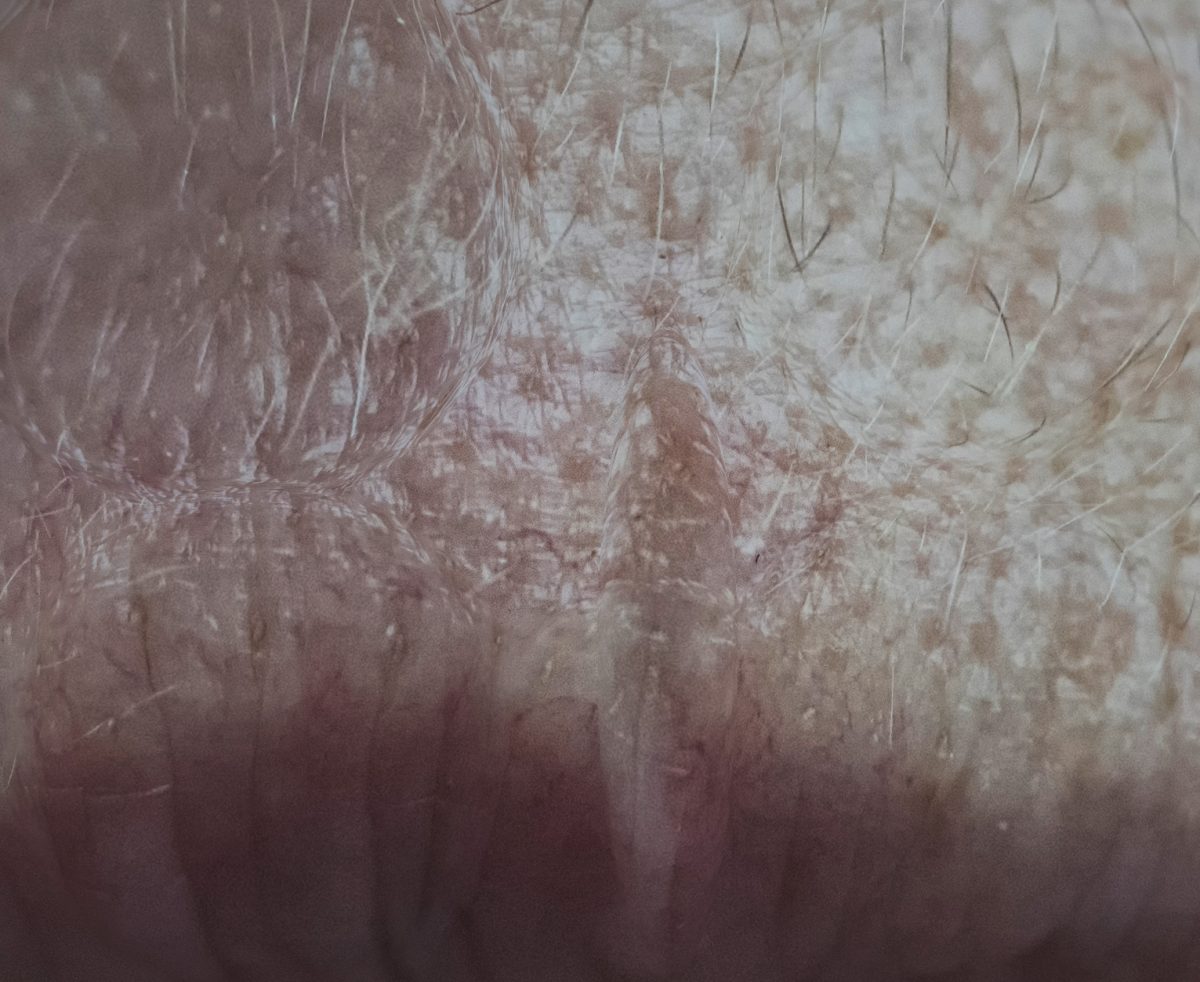 This is my abstract submission. It’s a close-up of a scar on my lip from when Daisy bit me while I was singing to her (everyone’s a critic these days!) In reality, the scar is barely noticeable but with the help of these Photoshop tools and filters – bloat; emboss; colour saturation and the ‘hard light’ blend option – I’ve tried to made it look quite grotesque and alarming.

My audio submission is a blatant attempt at presenting biased reporting in order to demonise ferrets. While this is a serious issue, I’ve tried to frame it as a tongue-in-cheek parody of investigative journalism. For the vox-pop, I asked friends to give me short negative descriptions of ferrets. These were sent in different formats, some that I could just download but others I had to record form my computer speaker onto my phone to get a sound file. I used the BBC sound effects library for the street sounds effect to create the illusion that the Vox pop was taking place outside. The ferret sounds behind the introduction and outro were provided by two of my ferrets, Dan and Daisy. I have used DAWs before but not Audition. I really enjoyed working with it especially as it’s interface is so user-friendly. I normalised most of the clips although I purposely kept the interview low in the mix to create the feeling that it had been recorded at a different location. I also had a bit of fun with the pitch change effect.

Please Note this feature contains language some may find offensive

Life As We Know It – Daisy’s Story is a gentle spoof of the human interest stories often seen on The One Show. Using some home videos and specifically created footage, it’s a fictional account of a reunion between two ferret friends. I edited the voices in Adobe Audition and the full video was compiled in Premiere Pro. 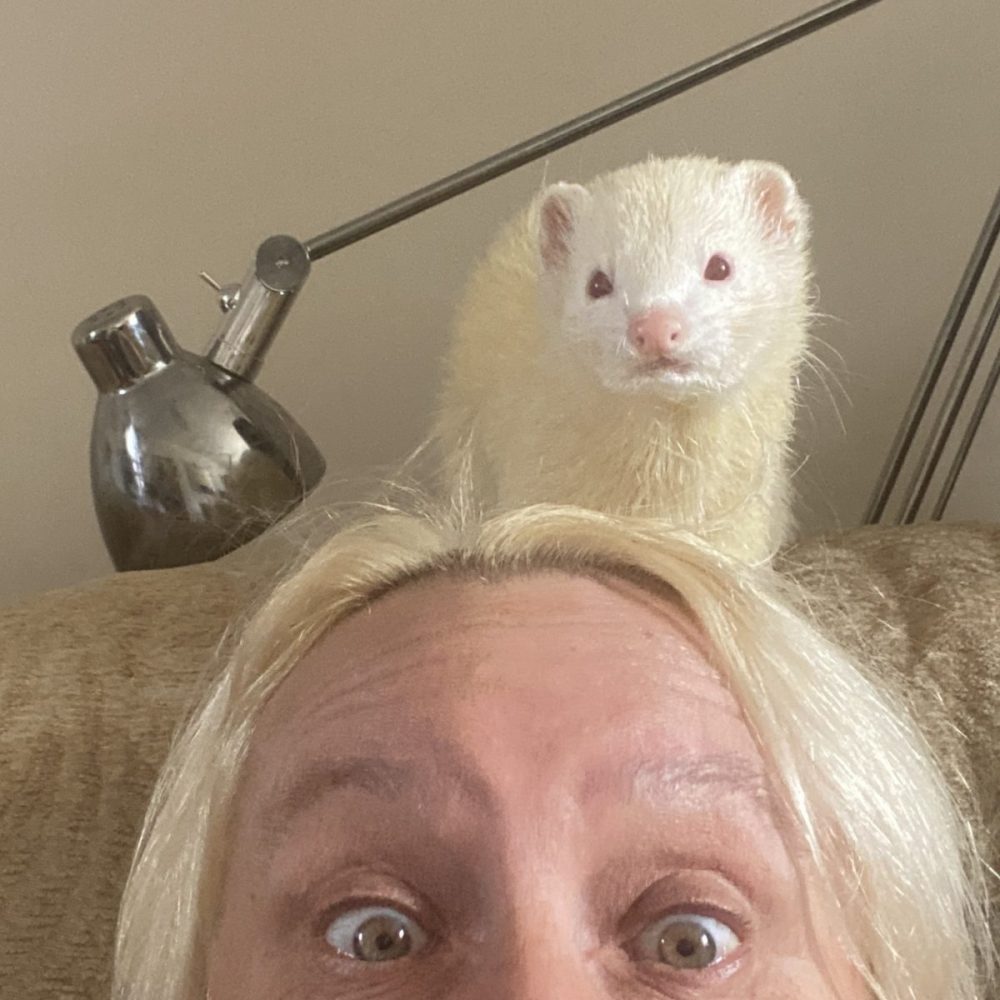 My career history has mainly involved working with audio, first as a sound engineer and then as an audio archivist working with fragile and obsolete media. Since 2010 I have dabbled in 2D and stop-motion animation as a hobbyist. For animation, I mainly use Toon Boom Harmony 17  Premium and Dragonframe. For audio work, I use Logic Pro X or GarageBand.

I have been learning Finnish for the past four years.

I currently share my home with four ferrets, three cats and two rats.

It is my ambition to unite all these interests as one project that could then be packaged and pitched to appropriate commissioning editors. The next four weeks will either help me towards my goal or expose me as horribly näive!

14 August 2020 Comments Off on VISUAL STORYTELLING