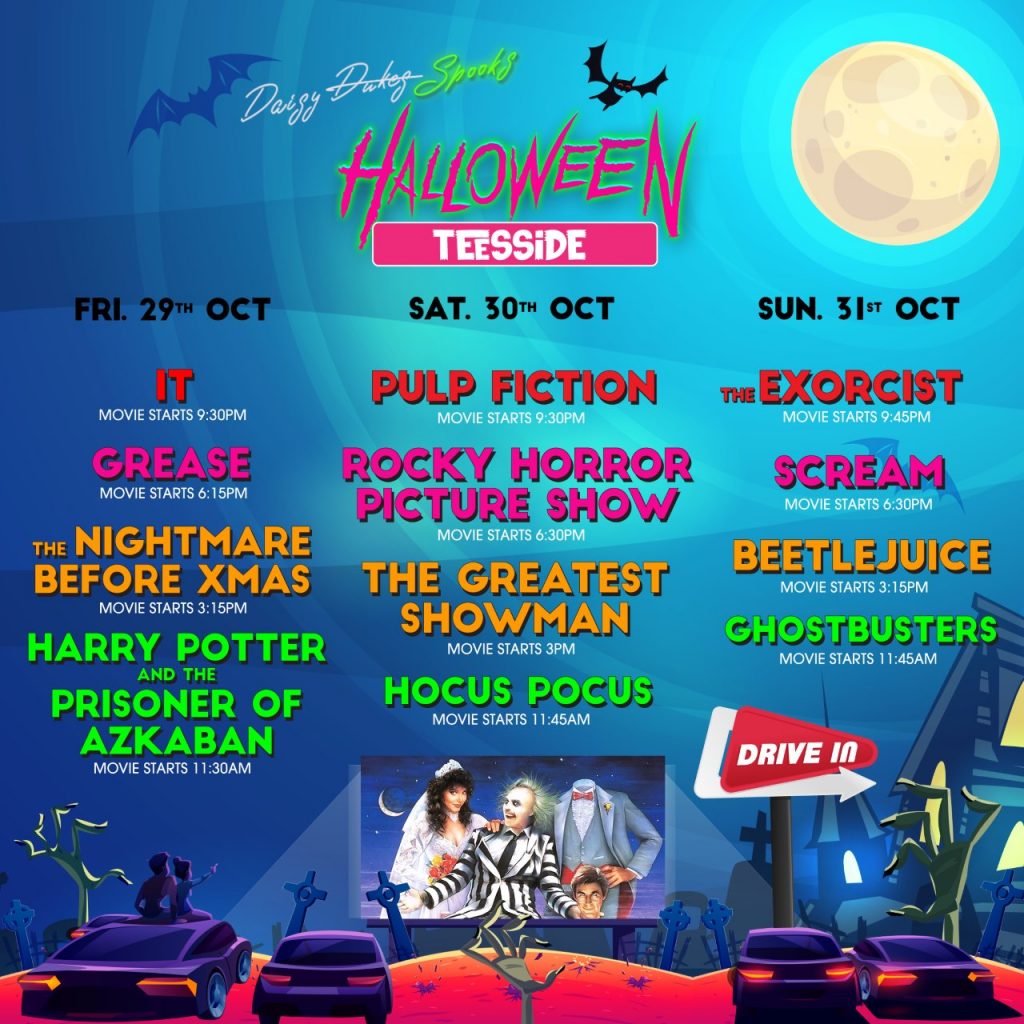 Ever wanted to experience a horror film where the characters come to life in front of you? Well this Halloween you can!

That’s because Daisy Duke’s Drive-in Cinema is teaming up with North East-based scare attraction Scream Factory to create an immersive experience which will be the first of its kind in the UK.

Daisy Dukes Drive-in will be at Redcar Racecourse for three days showing a wide variety of horror films from family favourites to cult classics, but this time with a twist.

The twist is that the actors from Scream Factory will be let loose to interact with audiences members as they watch along from their cars.

An array of characters will be on display throughout the weekend.

From children’s favourite characters during the day, to adults worst nightmares by night.

Daisy Duke’s Operations Manager Kane Ayton said: “Halloween is our favourite time of year, and we’ve pulled out all the stops for the people of Teesside!”

“We have partnered with local scare maze brand, Scream Factory to ensure it’s not just the films that will make you jump this Halloween.

“We will be showing a variety of films from family faves to late night screenings for the not so faint hearted.”

Four films will be shown everyday during the three day movie marathon starting from 11:30am with the final films beginning as late as 9:45pm.

Family films like, Hocus Pocus, Ghostbusters and The Greatest Showman will be shown earlier in the day with the films getting scarier as the night rolls on.

In the evening, horror fans can enjoy classics including, Scream, The Exorcist and IT with the added fear factor of the characters being there in-person.

Some films that will be screened do have age restrictions on them depending on how the film is graded, so bear that in mind before purchasing tickets.

Tickets for the event which starts on Friday October 29 cost from £26.50 for the family films, while prices for the late night screenings start at £31.80 for a two person car ticket.

Tickets for the Teesside event can be purchased on the Daisy Dukes Box Office website.

The event will be held at Redcar Racecourse which is located in the centre of Redcar.

Tickets can still be purchased for the event and you can contact Daisy Dukes Drive-in Cinema via their Facebook page if you have any enquiries about the event.

Fancy a walk through a scary Teesside wood for Halloween?

15 October 2021 Comments Off on Fancy a walk through a scary Teesside wood for Halloween?