After years of political unpredictability, the United Kingdom’s 46 million registered voters now have the chance to shape Britain’s future.

The question is, will the ongoing problem of Brexit mean that other crucial issues are overlooked when votes are cast?

TUXtra reporter Olly Burdett examines whether this will be a single-issue election or not, with the help of candidates running for Parliament in local constituencies.

Despite the upcoming election on December 12, uncertainty still remains on what road lies ahead for Britain with the issue of Brexit seemingly still up in the air.

It has now been over three years since the UK voted to withdraw from the EU, and this election very much marks the little progress that has been made during that period.

On the issue of Brexit, latest statistics from YouGov revealed that:

These results highlight the confusion around the problem, which is why it looks set to be a central issue in the election.

As surprising as it may be though, there are other issues that need looking at.

Christopher Massey is a Lecturer in Politics and History at Teesside University and also works as a Labour Councillor in Redcar and Cleveland.

He believes that Britain’s economy is the “number one” issue of this election and that public services should be focused on heavily as well.

He said: “Labour is very keen to nationalise elements of the economy and nationalise public services, whereas the Conservatives are clearly more linked to privatisation.

“We’ve got that question as to whether our economy enables us to reinvest in public services ten years after the financial crash.

“These are real issues around economic development in the country and deciding where we put our money.”

Jacob Young is currently running for Parliament in Redcar as the Conservative candidate and he firmly believes that Brexit should be the focus of this election.

Hear both his and Mr Massey’s thoughts on whether or not this will be a single-issue election, as well as the opinions of people across Middlesbrough:

Teesside voted overwhelmingly in favour of Brexit, with nearly two-thirds of voters (64.4%) deciding that they wanted to leave the EU.

The Brexit Party’s Faye Clements will be standing for Parliament in Middlesbrough this year.

She strongly denies that the Brexit Party is a one-issue party and states that they want to tackle other issues away from Brexit.

“We are a serious political movement. We do have other issues that we want to release to the public,” said Ms Clements.

“One of our major policy ideas is to scrap High Speed 2.

“With the money we will save from a clean-break Brexit, we will invest the funds into a regional investment fund, something which Middlesbrough will massively benefit from.”

Jo Swinson, the Leader of the Liberal Democrats, has remained consistent and clear on her ‘Stop Brexit‘ policy and wants to focus on investing in other areas.

Thomas Crawford is the Lib Dem parliamentary candidate for Middlesbrough and he does not believe this will be a single-issue election.

He said: “The reason why we want to stop Brexit is because it will allow us to make the changes we want to.

“The Liberal Democrats are the strongest and most credible voice for remain in this election.

“A vote for us is a vote to stop Brexit on day one, and then on day two, we’ll start our ambitious plans to target problems such as climate change.”

A YouGov report from June 2019 found that over a quarter of British people believe that the environment is the third biggest issue facing the UK, behind Brexit and health.

The same report highlights that the increased concern for the environment has coincided with the rise of protests by environmental campaign group Extinction Rebellion.

Sophie Brown is the Green Party candidate for the Middlesbrough South and East Cleveland constituency.

She said: “If it does become a one-issue election, I hope very much that that issue is the climate.

“However much the Conservatives would like this to be the Brexit election, The Green Party knows that climate change is a much more pressing matter.

“If action is not taken now, extreme weather conditions, like those being seen in South Yorkshire, will only increase.

“Within as little as a decade, scientists are telling us that we will be at a point of no return.

“It is also key that the NHS remains centre-stage in the run-up to December 12.

“The vast majority of the British public are deeply proud of our NHS, and all parties must have clarity on their plans for the beloved service.

“The Conservatives would like to have us all believe it is the Brexit election because this is the only issue from which they may be able to gain mass support.

“If their policies in other areas, and their record from the past decade, is scrutinised properly, the vast majority of people will see that they have nothing to offer them.

“For example, in my constituency of Middlesbrough South and East Cleveland, statistics show that policing and crime rates have become significantly worse since Tory MP Simon Clarke’s takeover in 2017.

“If we can make this the climate election, and put pressure on the two largest parties to make real action on the climate, it could be the most significant election in British history.” 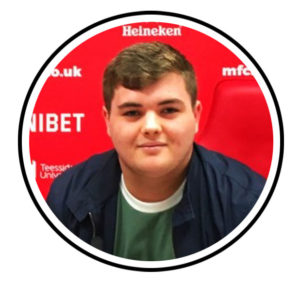 HOW CAN RACISM BE STAMPED OUT OF FOOTBALL?

10 December 2019 Comments Off on HOW CAN RACISM BE STAMPED OUT OF FOOTBALL?
Skip to content