Cardiff City FC, Chelsea FC, Manchester City FC, Manchester United FC and Tottenham Hotspur FC will be the first clubs to have licensed ‘safe standing’ in seated areas from 1 January 2022, whilst Middlesbrough FC rejected the chance to be involved with the trial.

This is a breakthrough in the campaign for safe standing to return to the top four leagues in English football, however the format of the trial has come under scrutiny as the facilities being put in place do not reflect the safety of the European style of safe standing areas.

I spoke to Jon Darch who works part time for Ferco Seating Systems who are expert manufacturers of fixed spectator seating and who also runs the Safe Standing Roadshow.

‘As a safe standing campaigner for over 16 years, I’m delighted that safe standing in the Premier League will begin in January.’ He went on to voice his disappointment about the conditions standing fans will be subject to; ‘conditions for standing fans will be unduly cramped and access in an emergency for paramedics will be impeded. That’s hugely disappointing and if the Premier League is to be a beacon of stadium safety’.

Jon’s views are also held by many safe standing campaigners, he believes ‘the government’s failure to remove the all-seater policy red tape requiring an unlocked seat for every spectator means that in the Premier League bulky seats will remain, taking up valuable space that is vital to spectator safety.’ The trial was to be a key moment in the campaign for safe standing to return but has been dampened by the news that the premier league will not be having the same format as in other countries such as Scotland.

I was lucky enough to speak to Andrea Jones who is the head of communications for the Sports Grounds Safety Authority, she spoke glowingly about the trial and reiterated that ‘Today’s historic announcement is a vital step towards fulfilling the Government’s manifesto commitment to introducing licensed safe standing areas at all-seater football grounds.’

Although the government has been criticised for not following the European format Andrea believes this will still be a very successful push for safe standing to return to English football, ‘Independent research conducted recently has identified the safety risks related to persistent standing in seated areas. It has also evidenced the positive impact engineering solutions, such as seats incorporating barriers or independent barriers, can have.’ SGSA have conducted very through research into this and is the main factor in the trial being allowed.

The link below is to access the report which has allowed the trial to take place. 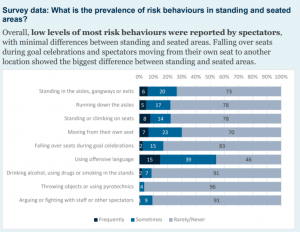 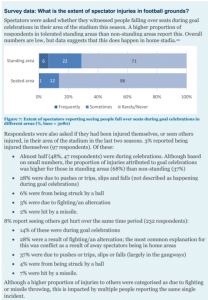 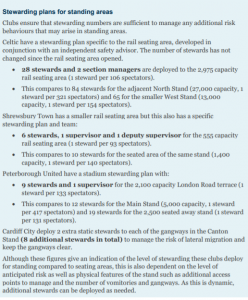 In addition to the news of the trial going ahead in January it was widely reported that Middlesbrough rejected the being involved, as the cost for the safe standing to be installed is a barrier. As it is for a host of EFL clubs.

To gage a better feeling of the supporters’ views on the news I spoke to Robert Nichols who is the editor of Fly me to the moon. ‘I am delighted to see the day when Safe Standing is being trialled. Middlesbrough fans were at the forefront in pushing for this change having voted overwhelmingly in favour of having the choice to stand or sit as far back as the summer of 2017’.

When I asked Robert about the club rejecting the trial, he believes that it is down to the financial aspect rather than being opposed to change. ‘I don’t believe there is an ideological reason for Middlesbrough to resist change but at present we cannot afford to replace large swathes of weathered seats for new seats let alone more costly rail seats…The other agent of change could be if fans really pressed for this as a priority and campaigned for rail seating. Again, I don’t see this happening until we have left the pandemic far behind.

With many football clubs in England still recovering from the devastating financial problems that the pandemic caused this news whilst exciting for fans may be a long way off the number one priority for stadiums up and down England and Wales.

Students pick up vintage fashion to help the environment

IS IT EASY TO BE SUSTAINABLE?

22 November 2019 Comments Off on IS IT EASY TO BE SUSTAINABLE?
Skip to content