With the sad events that happened on Wednesday 1st December 2021 of a Watford fan suffering a cardiac arrest during the game and medical staff performing Cardiopulmonary resuscitation (CPR) to stabilise the fan.

We seen in October again the importance of CPR and this time the use of a Automatic External Defibrillator (AED) during the match between Newcastle United and Tottenham Hotspur was stopped due to a medical emergency where Newcastle fan Alan George Smith suffered a cardiac arrest during the game and was stabilised through CPR and the use of a defibrillator.

However, there is still sports grounds up and down the country that don’t have a defibrillator on their premises in case of emergencies.

According to the British Heart Foundation, 60,000 people each year suffer a cardiac arrest outside a hospital.

A casualty suffering from cardiac arrest is very unlikely to survive without a defibrillator, with survival rates as low as 5%. 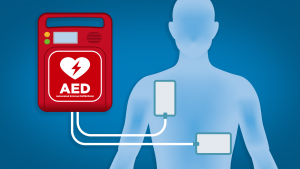 There is believed to be 10,000 AEDs available to the public with London having the most available.

According to the Resuscitation Council only 27.4% of the most deprived areas have one defibrillator compared to 45% in the highest. 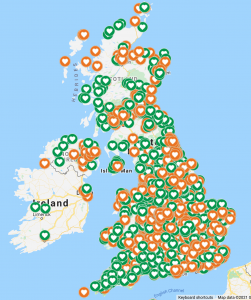 Map showing where AEDs can be accessed in the UK. Credit: HeartSafe

I spoke to Chris Moat, Doctor of Philosophy, Senior lecturer in Paramedics at Teesside University and Club secretary at Seaton Deval Fc on the importance of used a AED during CPR.

Following Christian Eriksen’s cardiac arrest at Euro 2020 MPs and former professional footballers called for the Football Association (FA), Premier League and Professional Footballers Association (PFA) to put a levy on transfers which would go towards equipment and training towards AEDS in sports clubs.

As well as Chris, I spoke to two physiotherapists and got their views. 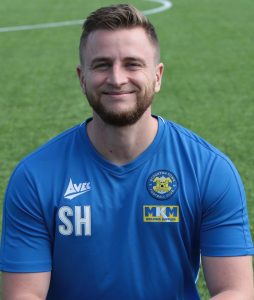 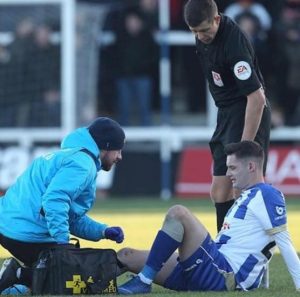 Do you think the Government / sporting governing bodies should be doing more to get Defibrillators in all sporting grounds?

Sam – ” In relation to football – the Premier League, FA and Sport England have a dedicated fund used to install defibs at football. grounds. ”

” However, a lot of clubs are still left to fund their own AEDs with only a discounted price. ”

” So in my opinion they should be doing as much as possible until every ground/club have access to a defibs thats deployable within the life-saving window. ”

James – ” In the UK I believe the FA & PFA along with other governing bodies should be bringing more in to football and especially the lower leagues and non-league football for both fans, players and staff. ”

Chris – It’s all about the money, if the FA where to insist that every club must have a defibrillator that is a massive outlay. ”

” The FA does as much as it can currently can without making it mandatory. But, I think the government have to step in and recognise that all these sporting events there is a risk of out of hospital cardiac arrests of unknown origin regardless of age. ”

” I coach at a grass roots level and we are fortunate to have an AED attached to every team throughout the club. ”

Do you think sport participants should be trained to do CPR and use a AED?

Sam – ” Although defibs are very user friendly and instruct the user how to deploy properly, basic life support training should be given to as many sport participants as possible. ”

” It’s also important to be aware of your clubs emergency action plan (EAP) to ensure proper management of a person in cardiac arrest including communication with local emergency services. ”

James –  ” I know in many professional clubs they are rolling this out in order for a player or staff to feel comfortable in case it is needed. ”

” I believe all staff should be trained not just medical, but with players especially. I do think defibs should be on hand most defiantly and I know from many courses I have been on they are very simple with a step by step approach so I believe many people will be okay when administrating if needed. ”

Chris – ” AEDs are absolutely safe for people in the public to use and should be avalibale for anyone to use wherever there are gatherings. ”

In June 2021 the Football Foundation along side the Premier League announced they will supply 2000 AED and storage cabinets to sporting grounds across the country.

Once these AEDS are installed it is believed that 1.5 million people will use the facilities during a season. They also announced that any new facailites that are built from the football foundation that they will have an AED incorporated into the building.

Leave your comments below on your thoughts if governing bodies are doing enough?

MIDDLESBROUGH REMEMBERS: LAYING OF THE FIRST POPPY WREATHS IN THE TOWN

8 November 2019 Comments Off on MIDDLESBROUGH REMEMBERS: LAYING OF THE FIRST POPPY WREATHS IN THE TOWN
Skip to content