A capacity crowd is expected to greet the teams at the home of Middlesbrough F.C. this Saturday afternoon, as top class international football comes to Teesside following the highly successful FIFA Women’s World Cup.

In what would be a record attendance for a UK women’s international outside of Wembley, tickets for the 34,472 capacity stadium have now sold out, with fans that have missed out being placed on a waiting list hoping to secure returns.

The current record is the 25,603 that was in attendance at Southampton’s St Mary’s stadium to witness England’s 0-0 against Wales in a World Cup Qualifier in April 2018.

And in a sign at how popular the women’s game has become, further attendance records are anticipated to be broken by the Lionesses later this month, with over 75,000 tickets sold for England’s Wembley date with Germany in November.

Talking ahead of the game, England Manager Phil Neville was pleased to be playing a nation of Brazil’s stature as his side embarks on the long road to preparing for the 2021 European Championships which is to be held on home soil.

“It is great to be able to have secured this fixture against such opposition. I know a lot of work has gone into making it happen” said the former Manchester United defender.

“Brazil will provide a different test to the other games we have lined up over the coming months, and it is always a special occasion when our two countries meet.”

Knocked out in the round-of-16 at the most recent World Cup against host nation France, Brazil are the reigning Copa América Feminina champions and hold an impressive record of winning seven out of the eight competitions held since it began in 1991, with the only occasion they failed to lift the trophy being in 2006 where they finished runners-up to then hosts and arch international rivals Argentina.

Indeed, Saturday’s match should prove a keenly contested affair against sides familiar with each other, with the pair having met twice over the last 12 months, although Neville’s charges may feel they have the upper hand given home advantage and the fact they have emerged victorious on both occasions.

In October 2018, a Fran Kirby goal secured a 1-0 victory in a friendly fixture played at Notts County’s, Meadow Lane, whilst England’s latest victory came in Pennyslvania, USA, where goals from Ellen White and Beth Mead helped claim a 2-1 victory on their way to lifting the 2019 She Believes Cup.

In his preview of the match Neville also expressed he’s “delighted” at bringing his squad to the North-East, in what will be the teams first home fixture since finishing fourth at this summers World Cup in France.

Describing the area as “a real footballing hot-bed” the former Manchester United defender was quick to acknowledge the impact the North-East has had in producing footballing talent that have gone on to feature for England at the very highest level.

Neville’s latest squad includes no less than eight players that hail from the North-East, including Durham born Captain, Steph Houghton, Stockton-on-Tees’ Jordan Nobbs and Beth Mead, who grew up in the village of Hinderwell, inbetween Saltburn and Whitby.

With all three boasting strong links to Wearside, having previously played for Sunderland A.F.C. Ladies during their careers, the wider squads ‘Black Cats’ connections are further enhanced through the inclusions of Lucy Bronze, Jill Scott, Lucy Stanforth and goalkeeper Carly Telford, who have also made appearances for the club.

Discussing her early football upbringing on her own website, 31-year-old Houghton explains how her family’s sporty background resulted in her finding a deep love for the game.

“My dad played semi-professionally and as soon as I could walk I had a ball at my feet. I’d kick the ball in the yard and play with my mates as often as possible.

“I played all sports, but football really stood out for me. My parents recognised that and encouraged me to play. They would take me to a soccer camp at Sunderland F.C. during the school holidays and I loved it – two days of playing football for five hours.

“That was the first time I got scouted. At that time there was no Centre of Excellence, so at 9-years-old I trained with the under 16’s.

Now arguably one of the most recognisable players in the female game at present, Manchester City defender Houghton is set to win her 115th cap for the Lionesses.

For Stockonite Jordan Nobbs, the chance to return to the international scene and play in front of a home crowd is likely to represent a small token of compensation from the heartbreak of missing out on the World Cup through serious injury.

Having ruptured her anterior cruciate ligament last November when playing for Arsenal, the combative goal scoring Midfielder has done remarkably well to recover from what was potentially a career threatening injury.

In an interview covered on the BBC Sport website talking about her return to the England setup, 26-year-old Nobb revealed, “It’s pretty special that the first game is in the North-East.

“I don’t know what my game time will be, but right now I want to be back in that squad, training well and if I get a chance to be on the pitch with that England shirt, that’ll be a privileged moment for me.

“My first step is going and just making sure that I keep my head down and keep working hard.”

Another player in England’s squad who will be especially looking forward to playing in front of a packed out Riverside will be Nobbs’ fellow Gunners teammate Beth Mead.

The 24-year-old forward enjoyed a standout season at her club last term, scoring 7 goals and laying on 12 assist in 19 league appearances, to help her side claim the Women’s Super League 1 title and will be looking to win her 22nd cap.

Prior to joining Arsenal at the start of 2017, hit-woman Mead had enjoyed a prolific six seasons at Sunderland A.F.C. Ladies, notching an impressing 77 goals in 78 appearances, with this period coinciding with her studying a Sports Development Degree, here, at Teesside University.

A product of the Universities Centre of Excellence, 24-year-old Mead’s initial taste of football came from what might appear a somewhat bizarrely named team in the local area, as she explained to the Arsenal website;

“They were called California Girls and basically the chairman of the club in Middlesbrough was from California Road, so the California bit came from there.

“I wish it was in California! I actually played for their boys team first, but then I played for the girls once it had been formed a few years later.”

Further recalling her initial football memories, the ‘T-T-Teessider’ also provided testament to how you should not let an unfortunate early experience prevent you from following your dreams;

“I ran out and maybe a minute into the game a big girl kicked the ball straight into my face. Then my nose started bleeding and I came off, so it wasn’t the best memory, but it’s nice to know that I was trusted to go up a couple of years earlier.”

With a record breaking capacity attendance expected, a statement on the Middlesbrough F.C. website has urged fans “to arrive early to avoid congestion both on the roads and at the turnstiles.”

Turnstiles will open from 11:15 am, with the Riverside’s FanZone will be opening from 10:00 am and after the match featuring giveaways and live entertainment.

The pre-match festivities will be hosted by BBC Tees Scott Makin, who will be joined with Eston singer, songwriter, Alistair James.

The FA England Band will also be attendance.

Tickets have SOLD OUT (no tickets will be available on the day).

Live TV Coverage is available via BBC ONE. 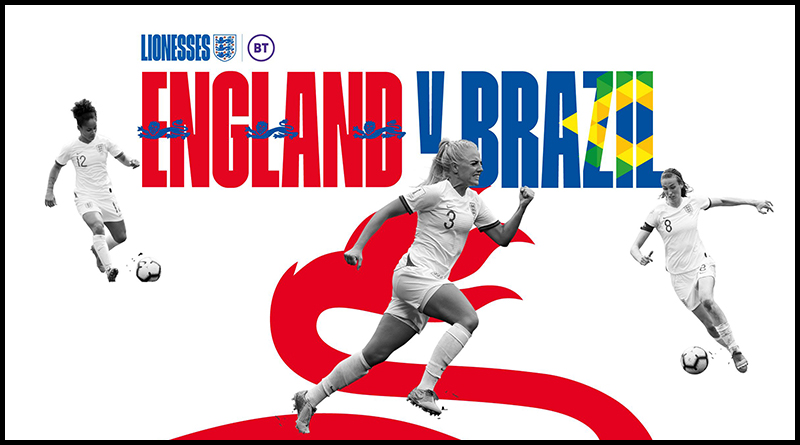 1 August 2019 Comments Off on EFL FIXTURES RELEASED: BORO KICK-OFF AWAY TO HATTERS