Two sisters from the North East are using their years of musical experience for their latest venture.

Olivia Crawford and Georgia Fletcher who are also known as Khalysis, are starting to make a name for themselves in the music world.

Olivia, 20, provides the vocals with an impressive range and a soulful tone, who has comparisons with current artists such as Zara Larson & Demi Lovato.

Georgia, 27, produces all the duo’s tracks, she is a self-taught musician, taught herself how to play guitar and piano amongst other instruments.

Olivia has a distinctive voice that you’d be able to recognise anywhere and you might think it sounds familiar – that’s because local law firm Atha & Co. asked the girls to produce and sing the new jingle for the radio.

Olivia said: “Since I was about four years old I’ve always enjoyed singing.”

Georgia on the other hand, started learning to play the trumpet in primary school.

She said: “A man came into school one day to teach us how to play the trumpet and I played this from year 5 up until I was at college.”

Georgia said her family had been given an electric piano off another family member but no one had no clue how to play it!

That’s when Georgia took matters into her own hands.

She said: “I decided to teach myself how to play it using videos off YouTube, I learnt a few cords then eventually learnt enough to be able to play a song.”

“One day when I was having a practice, Olivia came into the room and started to sing along.”

Olivia added: “That’s when our family were a little taken back by us and were shocked at how great we had sounded together.

“So from then we just practiced together and kept working hard.”

The duo also made the official UK Top 40.

Olivia said: “For us, the highlight of our careers so far was reaching #4 in the Official UK Top 40 with our charity single ‘Smile for Bradley’.

“We wanted to raise money for local superhero Bradley Lowery.

“Our aim was to raise as much money for Bradley whilst leaving a lasting legacy for him. We raised tens of thousands for pounds from the song.”

The song also reached #1 on the MTV trending chart.

With every high comes lows, and unfortunately Bradley didn’t make it after a long battle with Neuroblastoma, a rare form of cancer.

The girls explained  how hard it is to make it in the music industry.

Georgia said: “Emails hardly get opened and opportunities are scarce.”

“But we believe that we have the talent, the drive and the determination to make it in the music world.

Olivia explained that in five  years time, the sisters hope to be in a position where they can build a team around them to help take their career to higher levels.

“We’d love to be big enough to be able to do a national tour,” Olivia said.

You can catch the girls perform over the next few weeks at various venues around the North East. 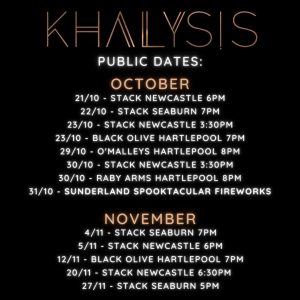 28 October 2020 Comments Off on FESTIVE COMPETITION