“This was Middlesbrough at it’s best!” was the verdict of Middlesbrough’s Mayor Andy Preston, shortly after most of the morning’s crowds had dispersed.

And who could disagree?

The morning had seen a wide demographic of Middlesbrough’s local community; men and women, young and old, people of different faiths, of different backgrounds, dressed in their Sunday best and all coming together on a beautiful Autumn’s morning with a unified purpose.

To honour the memory of those that must never be forgotten.

We will remember them

Sunday’s commemoration, marking 101 years since the end of The Great War, was the 100th year of what has become a nationally respected annual tradition.

And its important place in Middlesbrough’s consciousness was all to plain to see as thousands gathered around the cenotaph to pay their respects to the servicemen and women who had given their lives in armed conflict.

Hundred’s lined the streets of Linthorpe Road as the mornings parade, featuring veterans of past and present, young cadets and dignitaries made their way to the town’s centrepiece memorial by the gates of Albert park.

There to meet them as the North Skelton and Yorkshire Regiment Bands signalled the parties approach were hundreds more, with crowds of three to four deep seen positioning themselves behind the steel barriers marking out the area the service was to take place.

Bathed in autumn sunlight, an atmosphere of tranquil exaltation could be felt as Chaplin to the Royal British Legion, Reverend Glyn Holland led those congregated in song and prayer.

Then as a single bugle called out The Last Post, all around fell respectfully still and a silent vigil maintained at the foot of The Glorious Dead, followed by a united chorus,

“We will remember them.” 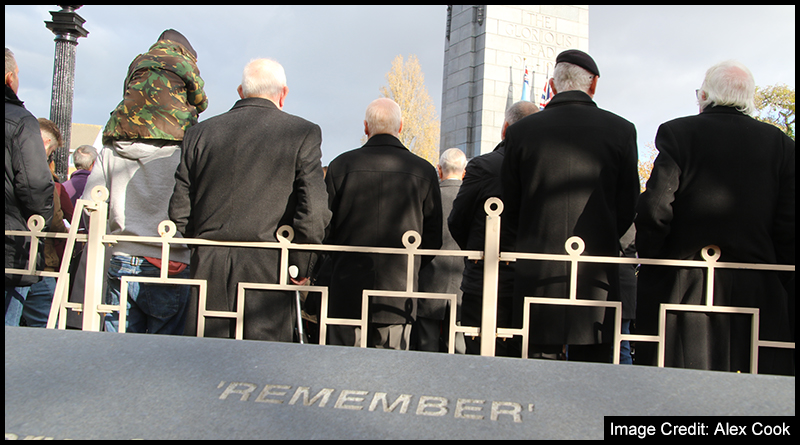 Individuals, organisations and community groups then in turn paid their respects to the fallen through the laying of wreaths.

This included Teesside University Student Union President George Reeves, who laid a wreath on behalf of the Students Union.

Discussing his immense pride at being part of such “a great occasion” the elected President of Activities revealed the special moment was made even more so through the inclusive nature of the day’s remembrance commemorations, as he expressed,

“[This shows] how wonderful our traditions as a nation are, and how well we work including different ethnicities and cultures as one to commemorate such a moving annual tradition.”

One of the men at the forefront of this unification of faiths and cultures is youth and community worker, Lance Corporal Sadiq of 4th Brigade, 162 RLC.

Talking about his efforts in making the wider local community feel more involved in the town’s remembrance ceremonies, L/Cpl Sadiq pointed towards to the positive effects of the growing engagement.

“In the first year we did this 30 people turned up, this year about 80, which is really good.”

And for a man proud of his families tradition of standing shoulder to shoulder with British Armed forces, the growing recognition of the crucial role Commonwealth countries played as part of the war effort was a important further outcome of the day’s ceremony.

“My Great Grandfather in the Kenyan Police fought for the British.

“My Great Uncle fought in Ethiopia against the Italian’s.”

“Somewhere along the line of our ancestries from the ethic minority, be it Asian or Afro-Caribbean, there has been input where they have fought for Great Britain and England.”

L/Cpl Sadiq is hoping that in the future a plaque and tree recognising the efforts of foreign and commonwealth soldiers will soon be placed within the grounds of Albert Park following initial discussions with the local council.

Passing of the tradition to a new generation

With the focus of the week’s earlier Laying of the First Poppy ceremony centring around the passing of the remembrance tradition to a new generation, it was heartening to see so many younger faces amongst the gathered crowd’s.

This included brother’s Josh and Jack Chapman, members of Middlesbrough’s Sea Cadets, who lodge is based on the opposite side of Albert Park.

Catching a word with the pair alongside their proud Mother, Jack who is 14 and attend’s St Peter’s School said of the day’s experience,

“I expected it to be difficult and hard to learn because I’ve never done it before, I’ve never marched, but it was fun to do. I had people around that could teach me.”

A touching personal tribute could also be witnessed from 7-year-old, Riley Grayson, following the service.

Making his way to the cenotaph with his Grandma in hand, Riley removed his own poppy and placed it at the foot of the cenotaph.

Asked what prompted him to make such a wonderful gesture, Riley, said “because the soldiers fought for us.”

The St Thomas More pupil would then go on to explain what he had learned at school about the different colour’s of poppies people choose to wear and what they represent.

For Riley, who’s Grandad was a solider in the Second World War, it was clearly “very important” that everyone was remembered for the sacrifices they made.

And to borrow a phrase from earlier… who could disagree?